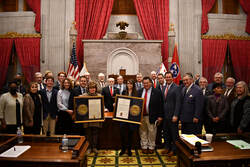 NASHVILLE, Tenn. — State Rep. Jay Reedy, R-Erin, is proud of recent legislation that gives military families more flexibility to choose when to bury their loved one who died while on active duty.

Reedy, a U.S. Army veteran, co-sponsored the Major Trevor Joseph Act last year to ensure that those who make the ultimate sacrifice in service of their state and nation are given a proper military burial on a day of the week that aligns with their family’s requests.

Since the legislation was signed into law, two weekend services have taken place in the state, according to the Tennessee Department of Veterans Services. Previously, military burials were only held on weekdays.

“We must do everything we can to support our active duty military members, veterans and their families,” Reedy said. “This legislation is a small but meaningful way we can help make sure those who have paid the price for our freedoms are properly honored.”

Joseph, a Shelby County native and medical officer with the U.S. Army, was killed in 2019 when his helicopter crashed while attempting to recover a soldier in Fort Polk, La. At the time, his family requested that he be buried in the state veterans cemetery on a weekend to accommodate friends and family who wished to attend the ceremony. However, he was required to be interred on a weekday.

The Major Trevor Joseph Act requires the Department of Veterans Services to provide burial services for a person who died while on active duty with the United States armed forces, Tennessee National Guard or Tennessee Air National Guard and is being interred in a state veterans’ cemetery on a date requested by the family members of the person if the department is given at least 72 hours’ notice for the burial.

Since 2017, Reedy has served on the Governor’s Council for Armed Forces, Veterans and their Families. He is also a member of the Veterans Caucus in the General Assembly.

Jay Reedy represents House District 74 which includes all of Houston and Humphreys and part of Montgomery counties. As a result of redistricting, the district will change later this year to include all of Benton, Houston, Humphreys, Stewart and part of Henry counties. Reedy can be reached at rep.jay.reedy@capitol.tn.gov or by calling 615-741-7098.